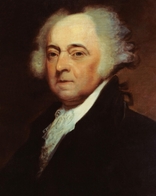 The complete quote: “I do not say that democracy has been more pernicious on the whole, and in the long run, than monarchy or aristocracy. Democracy has never been and never can be so durable as aristocracy or monarchy; but while it lasts, it is more bloody than either. … Remember, democracy never lasts long. It soon wastes, exhausts, and murders itself. There never was a democracy yet that did not commit suicide. It is in vain to say that democracy is less vain, less proud, less selfish, less ambitious, or less avaricious than aristocracy or monarchy. It is not true, in fact, and nowhere appears in history. Those passions are the same in all men, under all forms of simple government, and when unchecked, produce the same effects of fraud, violence, and cruelty. When clear prospects are opened before vanity, pride, avarice, or ambition, for their easy gratification, it is hard for the most considerate philosophers and the most conscientious moralists to resist the temptation. Individuals have conquered themselves. Nations and large bodies of men, never.”

Previous post Ideas here for a more sane and responsible Halloween, from the Zero-Waste Chef… Next post Such a sad statement that our once exemplary democracy now needs foreign observers, and that they are concerned…

From US Funerals Online: https://www.us-funerals.com/human-composting-as-a-new-death-care-alternative-a-guide-to-nor/#.Y3-ExC-B0go lower carbon footprint, don't take up valuable real estate, give back to the Earth, nourish...

Thanks to Rob Rogers. Trump, turkey